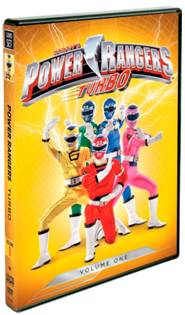 On April 1, 2014, join the Power Rangers as they battle the dreaded villain Divatox at rapid speed when Shout! Factory releases Power Rangers Turbo: Volume 1, a 3-DVD box set that contains the first 23 episodes of the series.

Following its debut in 1993, Saban’s iconic live-action pop culture series, Power Rangers quickly became the most-watched children’s television program in North America. Emphasizing the importance of teamwork, responsibility and helping others by following the adventures of a group of ordinary young people who “morphed” into superheroes, this long-running series has been seen in more than 60 countries, translated into numerous languages, and remains a mainstay in children’s programming blocks. For 20 years, the highly entertaining saga and fan-favorite characters from Power Rangers have captivated children and adults alike and are beloved by legions of fans worldwide.

After All of these Years:

FROZEN Rigging Team: I Will Never Look at Animated Movies the Same Again