PEOPLE LIKE US Opens in Theatres Everywhere on June 29th! 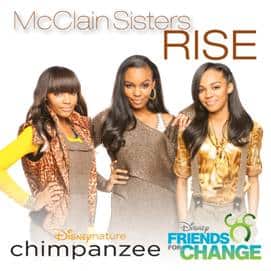 “Rise” from the McClain Sisters for Disneynature’s Chimpanzee is now available on You Tube. I wanted to share it with my readers:

A little background on the McClain Sister’s straight from Disneynature:

“We are thrilled to have China Anne, Lauryn, and Sierra, join our music family,” commented Executive Vice President of Disney Music Group, Ken Bunt. “They are three exceptionally talented young artists with a very exciting road ahead of them.”

McClain Sisters lead singer China Anne McClain is an acclaimed young actress who, in addition to starring in Disney Channel’s A.N.T. FARM, a role for which she received a 2012 NAACP Image Award nomination, also starred in the House of Payne television series and the movie The Gospel. The talented trio’s mounting popularity is evidenced by accomplishments such as the A.N.T. FARM soundtrack’s soaring debut at #29 on the Billboard 200, which includes tracks by McClain Sisters “Electronic Apology” and “Perfect Mistake,” as well as notable acting roles in the Tyler Perry feature film Daddy’s Little Girls and a recent performance for more than 72,000 at RODEOHOUSTON 2012.

“We are beyond happy to be joining the Hollywood Records family,” shared the McClain Sisters. “Music has always been a part of our lives and now we cannot wait to share our music with everyone.”

“Rise,” written and performed by McClain Sisters after being inspired by Disneynature’s feature film CHIMPANZEE, is the latest Disney Friends for Change anthem. With the motivating lyrics “Together we can do anything,” the song captures the central message of the program: when kids and families work together, they can inspire each other and their communities to make a lasting, positive change in the world. “Rise” is the fourth Friends for Change anthem to be released with a benefit back to the Disney Worldwide Conservation Fund. This contribution marks nearly $1 million awarded through the music campaign to charities working to protect the planet and conserve nature for future generations.

PEOPLE LIKE US Opens in Theatres Everywhere on June 29th!