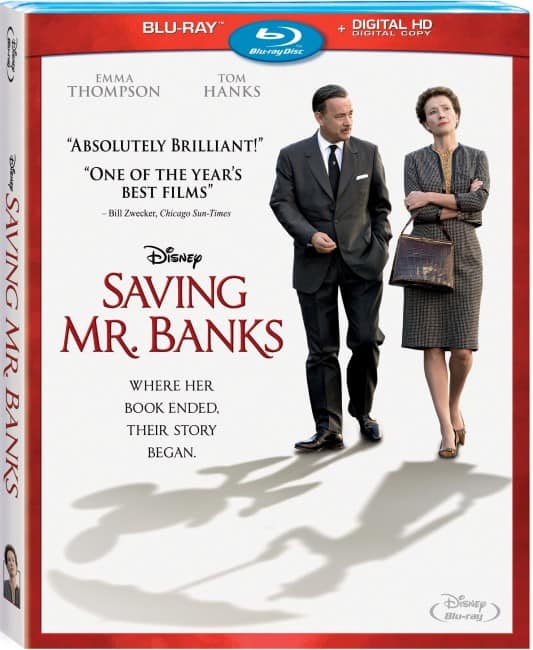 The Extraordinary, Untold True Story of the Origins of a Disney Classic

Tom Hanks and Emma Thompson bring to life the untold true story about the origins of one of the most treasured Disney classics of all time.  John Lee Hancock (The Blind Side) directs this acclaimed film, which reveals the surprising backstory behind the making of Mary Poppins.  Determined to fulfill a promise to his daughters, Walt Disney (Hanks) tries for twenty years to obtain the rights to author P.L. Travers’ (Thompson) beloved book.  Armed with his iconic creative vision, Walt pulls out all the stops, but the uncompromising Travers won’t budge.  Only when he reaches into his own complicated childhood does Walt discover the truth about the ghosts that haunt Travers, and together, the set Mary Poppins free.

On Blu-ray and Digital HD, Saving Mr. Banks sweeps viewers away with enchanting high definition picture and sound, plus delightful, never-before-seen bonus features, including “The Walt Disney Studios: From Poppins to Present,” in which director John Lee Hancock takes viewers on an insider’s tour of Disney Studios today and reflects on studio life during the creation of Mary Poppins.  Additional bonus materials include “Let’s Go Fly a Kite,” in which the film’s cast and crew sing an impromptu version of the iconic song on set during the last day of shooting, and deleted Scenes.

To stay connected with the latest news and information about Saving Mr. Banks:

For 90 years, The Walt Disney Studios has been the foundation on which The Walt Disney Company was built. Today, the Studio brings quality movies, music and stage plays to consumers throughout the world. Feature films are released under four banners: Disney, including Walt Disney Animation Studios and Pixar Animation Studios; Disneynature; Marvel Studios; Lucasfilm; and Touchstone Pictures, the banner under which live-action films from DreamWorks Studios are distributed.  The Disney Music Group encompasses the Walt Disney Records and Hollywood Records labels, as well as Disney Music Publishing.  The Disney Theatrical Group produces and licenses live events, including Disney on Broadway, Disney on Ice and Disney LIVE! For more information, please visit www.disney.com.