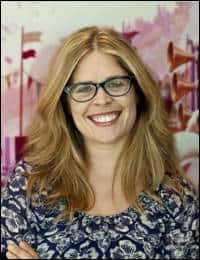 BURBANK, Calif. (November 29, 2012) — Walt Disney Animation Studios (WDAS) taps Jennifer Lee to join Chris Buck at the helm of its 53rd full-length animated feature “Frozen,” which is slated for the big screen on Nov. 27, 2013. Lee, who has contributed to the film’s screenplay, is one of the screenplay writers of this year’s hit arcade-hopping adventure “Wreck-It Ralph.”

Featuring the voices of Kristen Bell and Idina Menzel, “Frozen” is the coolest comedy-adventure ever to hit the big screen. When a prophecy traps a kingdom in eternal winter, Anna, a fearless optimist, teams up with extreme mountain man Kristoff and his sidekick reindeer Sven on an epic journey to find Anna’s sister Elsa, the Snow Queen, and put an end to her icy spell. Encountering mystical trolls, a funny snowman named Olaf, Everest-like extremes and magic at every turn, Anna and Kristoff battle the elements in a race to save the kingdom from destruction.

“Frozen” producer Peter Del Vecho says the match-up is perfect. “Jenn has a real connection to the film and creates dynamic and relatable characters. Her sense of comedy, adventure and story structure paired with Chris Buck’s vast experience and incredible instincts create an ideal situation for this film.”

Lee’s screen adaptation of John Steinbeck’s “The Acts of King Arthur and His Noble Knights” is being produced by Troika Pictures. She has an original screenplay in development with Leonardo DiCaprio’s Appian Way, and her original script “Lucid Dreams” was optioned by Wolfgang Peterson’s Radiant Productions. Lee holds an MFA in Film from Columbia University and a BA in English from the University of New Hampshire.

Buck directed (with Kevin Lima) Disney’s 1999 high-swinging feature “Tarzan,” which won an Oscar® and a Golden Globe® for Best Music/Original Song (Phil Collins’ “You’ll Be in My Heart”). He directed (with Ash Brannon) 2007’s Oscar-nominated “Surf’s Up” for Sony Pictures Animation. His credits within animation also include 1989’s “The Little Mermaid,” “The Rescuers Down Under” (1990) and “Pocahontas” (1995).

With original songs by Tony®-award winner Robert Lopez (“The Book of Mormon,” “Avenue Q”) and Kristen Anderson-Lopez (“In Transit”),“Frozen” journeys into theaters Nov. 27, 2013, in Disney Digital 3D™ in select theaters. For more information, like us on Facebook: http://www.facebook.com/DisneyFrozen.