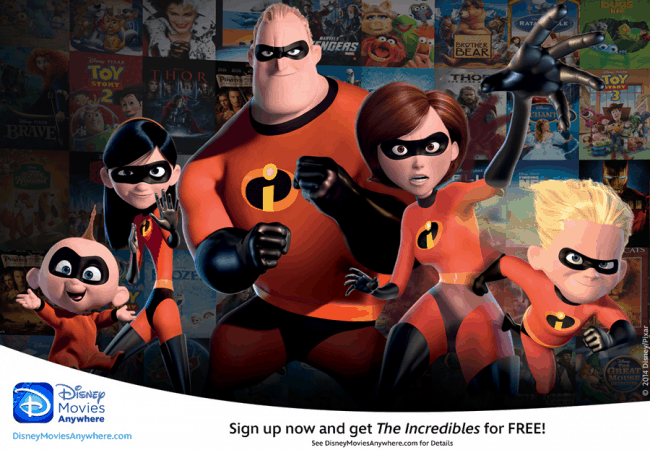 Bonus Clip: The Making of Frozen

This whole idea is so incredibly neat!

Planning to snap up this winter’s hit film Frozen as it becomes available on Digital HD today? Head over to the iTunes app store and add another download to your queue, because Disney Movies Anywhere, Disney’s all-new digital movie service and app, is here, and it’s free!

Debuting with iTunes as its exclusive launch provider, Disney Movies Anywhere is a simple, streamlined way to manage and enjoy your digital collection of Disney, Pixar, and Marvel movies on multiple devices. Plus, for a limited time, you’ll receive a free digital copy of Disney•Pixar’s The Incredibles when you sign up and connect your iTunes account.

Why will this make your life easier?

It collects all your eligible Disney digital entitlements – whether you redeemed them from a Digital Copy code or purchased them in iTunes – so you can have access to them on your iPhone, iPad, iPod touch, and Apple TV, as well as on your personal computer (Mac and Windows machines).

Disney Movies Anywhere is the only place to see exclusive content, including these featurettes from Frozen and Thor The Dark World

“Disney Movies Anywhere offers an exceptional consumer experience built around some of the most beloved and popular entertainment brands in the world,” said Alan Bergman, President, The Walt Disney Studios. “This unique technology underscores Disney’s commitment to meeting our consumers where they are with the content they want, and we’re thrilled to debut with iTunes, the #1 digital media retailer in the world.”

As a trusted creator of premium entertainment experiences for the whole family, Disney is committed to making it easier than ever for consumers to dive in and grow their digital movie libraries. In a seamless and family-friendly experience, Disney Movies Anywhere unlocks digital content across platforms and devices, enabling access to user-owned Disney digital content and movies in the Disney Movies Anywhere ecosystem and through iTunes.

With an easy-to-use interface, consumers can explore live-action and animated films from Disney, Pixar, and Marvel; watch exclusive content and bonus features; preview upcoming offerings; and more. Users can simply connect their iTunes account to their Disney Movies Anywhere account to begin populating their Disney digital movie locker and watch movies online and on their devices. Featuring simultaneous access on multiple devices, Disney Movies Anywhere enables consumers to stream and download Disney movies on their iPhone, iPad, and iPod touch and Apple TV (through iCloud or using AirPlay). In addition, Disney Movies Anywhere functions as a streaming movie service when users log in to the website on their desktop or laptop computers (Mac or PC).

“Disney Movies Anywhere is an adaptable digital ecosystem designed to help consumers consolidate their Disney movie collections and enjoy them for years to come,” said Jamie Voris, Chief Technology Officer, The Walt Disney Studios. “The beauty of this technology is that it enables us to work with iTunes and future provider partners to ensure movie lovers have streamlined access to all of their favorite Disney titles no matter which device they are on. The intuitive layout of the website and app creates an easy and enjoyable browsing environment for the whole family.”

About The Walt Disney Studios

For 90 years, The Walt Disney Studios has been the foundation on which The WaltDisney Company was built. Today, the Studio brings quality movies, music andstage plays to consumers throughout the world. Feature films are released under the following banners: Disney, including Walt Disney Animation Studios and Pixar Animation Studios; Disneynature; Marvel Studios; Lucasfilm; and Touchstone Pictures, the banner under which live-action films from DreamWorks Studios are distributed. The Disney Music Group encompasses the Walt Disney Records and Hollywood Records labels, as well as Disney Music Publishing. The Disney Theatrical Group produces and licenses live events, including Disney on Broadway, Disney On Ice and Disney Live!.

Bonus Clip: The Making of Frozen