The only thing better than a good Christmas movie is a bad one.

I say this with full seriousness. This is not a list of movies to avoid watching this Christmas, it’s the ones that I highly recommend.

There are few things more soothing than wearing your warmest PJs and drinking hot chocolate while it snows outside, and watching the most predictable Christmas movie. I personally find that Netflix Christmas movies deserve their own category of bad. As a slightly more upgraded take (but not too far from) on Hallmark Christmas movies, you rarely stumble on any cinematic brilliance.

What you do get is an experience of undoubted positivity and optimism that feels as sweet as a mouth full of peppermint cane.

And as 2020 is arguably the worst year in our lives so far (I say ‘so far’ with a grimace), we are in no mood to look for stark realism in our Christmas movies. We want sugary romance, plot twists that are as surprising as the back of our hands, and happy endings that make you drift off to sleep.

Here are some of the Netflix Christmas Movies that are so bad, they’re almost good. They might include some spoilers, but if you’re watching a Christmas movie to be surprised at the ending: I’ve got a spoiler for you. You’ll know the ending in the first five minutes of the movie anyway. 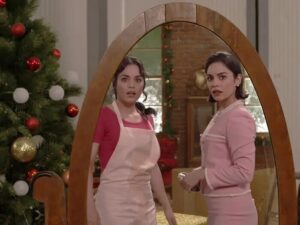 I’m not sure if the target audience for The Princess Switch is thirteen or nine years old. What I can say for sure is that they’ve written it for someone who isn’t old enough to recognize Vanessa Hudgens from High School Musical.

In this movie, Chicago-based baker Stacy travels to Belgravia (a truly horrible attempt at coming up with a fake country. We’ve had Genovia, Aldovia, and now Belgravia) for a baking competition. (Is anyone seeing a pattern of Chicago girls getting picked to travel overseas? We’re looking at you, Emily)

In Belgravia, she encounters the royal princess, who is also played by Vanessa Hudgens. After realizing they could be long-lost twins, they switch roles in life in a knock-off Parent Trip fashion. Princess Margaret wants to ‘live a normal life,’ which is all princesses seem to want to do if you believe in pop-culture.

They end up switching their love interests as well, and we’re supposed to accept that these aforementioned men are more than pleased with a duplicate copy. (After all, the face is the same, right? What’s personality?) 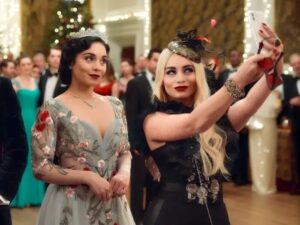 It was slightly plausible (VERY slightly) that two separated-at-birth twins meet in their adult lives and that one is royalty with an awful British accent. But a third Vanessa Hudgens.

It’s so awful you can’t watch it.

In this sequel, Duchess Margaret and her love interest aren’t on the best terms, so her lookalike Stacy decides to help. That’s sweet, right? Two Vanessa Hudgens helping each other? But now we introduce the third Vanessa Hudgens: Fiona, a ‘party girl’ (because that’s an original) and stirs up the entire story.

Vanessa Hudgens, in her three avatars: baker girl, party girl, and princess, do the bare minimum to keep you mildly entertained. It’s the kind of movie you can play while doing household chores and still not miss a single bit of vital information. It’s also incredibly family-friendly, like all the other movies on this list.

I enjoyed this movie late night/early morning as I ate instant ramen noodles and finished a box of chocolates that was meant to be a gift for someone else: and I think that’s all you need to know.

Increase Your Instagram Reach Using the New and improved Tailwind 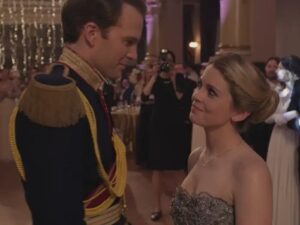 This one is about a journalist who goes undercover to report about the royal family of Aldovia.

Surprise, surprise. She falls in love with the prince and faces the conflict of choosing her career over her love for him.

But what I want to know is: what is Netflix’s fascination with royalty in Christmas themes? Is it one of the criteria for a movie to be considered a Christmas one?

I think it appeals to the Cinderella fantasy we all have. The poorly veiled attempt at progressive themes by making the journalist seem like she has a career is fooling no one. Nevertheless, it’s a cozy film to watch and can even elicit some laughter at the downright ridiculous plot points.

The Knight Before Christmas (2019) 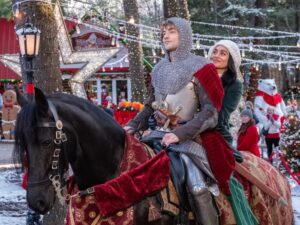 If you thought you had enough of Vanessa Hudgens in The Princess Switch with two of her (and three of her in the sequel!), then I’m sorry to break it to you. There is more Vanessa Hudgens on this list.

I don’t know what it is about her that makes her the perfect Christmas film heroine, but it might be that she quite literally radiates innocence and positivity. There is something wholesome about watching your High School Musical favorite grow up to star in the same PG movies. (Nobody remind me of Spring Breakers, I’m trying to burn that memory)

In this movie, Brooke (Hudgens) is a small-town teacher and comes across a knight called Sir Cole, who apparently time-travels and has to complete a couple of tasks. Sir Cole is exactly like me, except for the time-traveling part.

It’s a warm, fuzzy romance with absolutely no negativity. This is the kind of movie you watch with your very young nieces and nephews, or when you watched a horror movie and can’t sleep at night. An hour spent looking at Vanessa Hudgen’s hopeful smile is very useful in making you forget about exorcisms.

Don’t forget to renew your Netflix subscription (or ask your boyfriend’s mom’s co-worker’s dad to renew it) so that you can indulge in my favorite guilty pleasure with me.