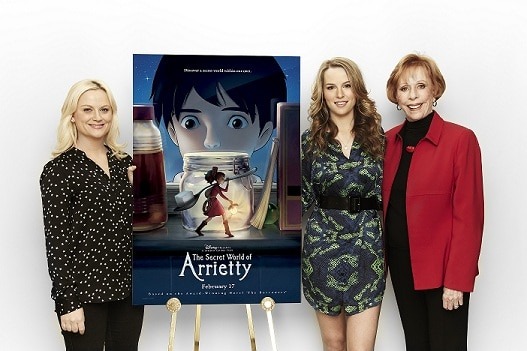 Have you heard that “The Secret World of Arrietty will be in theaters today Friday, February 17, 2012? I have seen a few commercials for this movie and thought it sounded like a great movie. (well anything with Carol Burnett is great to me, as I grew up with her on TV).

Below is all of the information you will need to make an informed decision on exactly WHEN you will get yourself to the theater to see this movie. Information was received from Disney, I am just merely passing on their exciting information for my readers to have access to. Let me know if you see this movie and make comments on this post letting me know what you think!

THE SECRET WORLD OF ARRIETTY

Based on “The Borrowers” by:    Mary Norton

Residing quietly beneath the floorboards are little people who live undetected in a secret world to be discovered, where the smallest may stand tallest of all.  From the legendary Studio Ghibli (“Spirited Away,” “Ponyo”) comes “The Secret World of Arrietty,” an animated adventure based on Mary Norton’s acclaimed children’s book series “The Borrowers.”

Arrietty (voice of Bridgit Mendler), a tiny, but tenacious 14-year-old, lives with her parents (voices of Will Arnett and Amy Poehler) in the recesses of a suburban garden home, unbeknownst to the homeowner and her housekeeper (voice of Carol Burnett). Like all little people, Arrietty (AIR-ee-ett-ee) remains hidden from view, except during occasional covert ventures beyond the floorboards to “borrow” scrap supplies like sugar cubes from her human hosts. But when 12-year-old Shawn (voice of David Henrie), a human boy who comes to stay in the home, discovers his mysterious housemate one evening, a secret friendship blossoms. If discovered, their relationship could drive Arrietty’s family from the home and straight into danger. The English language version of “The Secret World of Arrietty” was executive produced by Kathleen Kennedy and Frank Marshall, and directed by Gary Rydstrom. The film hits theaters Feb. 17, 2012.

Until a Child Tells You….