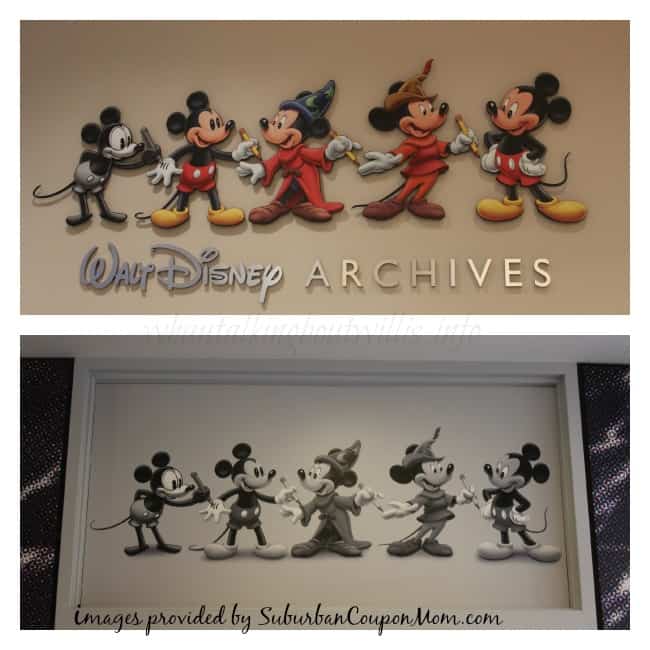 Walt Disney Studio Archives has to be, by far, one of my most favorite places to visit. You have to realize this is coming from a person that didn’t really enjoy world history, well anyone’s history. (I liked math).  There is just something about delving into Disney history that I find more than interesting. I love the black and white pictures that show just how old the photography is; and the older looking styles of clothing. 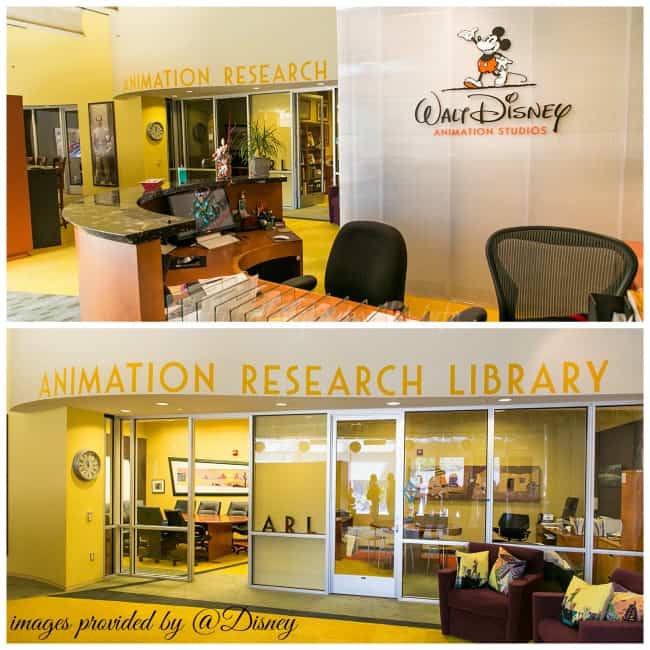 We were welcomed into the archives by a woman named Mary. She gave us some history on the archives which was so informational. The animation research library is also known as ARL. They are the repository of all of the original animation artwork that still exists within the company that was created for the animated feature films and the short films. 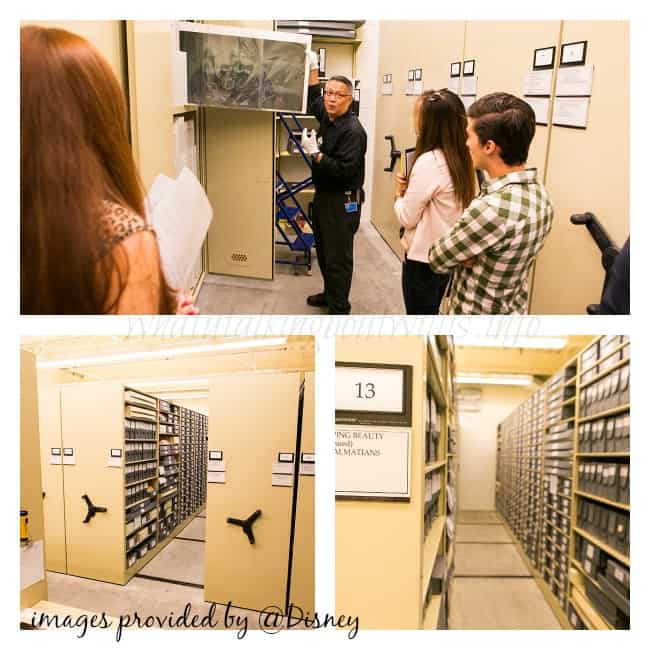 A bit of interesting information we were told on the tour:

Peter Pan was one of those films that was somewhat dear to Walt Disney because, when he was about 13 or 14, he saw a stage production, a traveling roadshow production, of Peter Pan.

Starring Maude Adams.  And that had an influence on him.  He had actually saved up his money, he and his brother, and I guess he tells a story about breaking up a couple of piggy banks and spent the money to go see it.  And interestingly enough, when he was in high school, the school had put on a production of Peter pan.  And, you know, it almost, as fate would write it, he was actually cast as the part of Peter Pan.

So, it was he, up on ropes, swinging back and forth, as Peter Pan, flying around, and I guess as the story goes, he even landed in the audience once.  And, later, then in 1923 and 1924, he saw a silent film version of Peter Pan.  And what is interesting about that silent film version was, is that that version was the first version of it, the telling of the tale, where you actually saw a physical Tinker Bell.

Because, up until that point, she was just a sparkle of light on the stage.  So, and, Walt, as he was growing up, he would tell the story about how his grandmother would always tell him fairy tales.  He’d pull out the Grimm’s Book of Fairy Tales and things like that.  So he was very, very attuned to tales and fanciful tales, and things like that, and I think that this just touched a nerve in him.  And he always filed it in the back of his head, that somehow, it was a story that was dear to him.

This tour had so much information that I know I am leaving quite a bit out. I am hoping that I hit enough highlights to give you a chance to see a bit into the Animation Research. 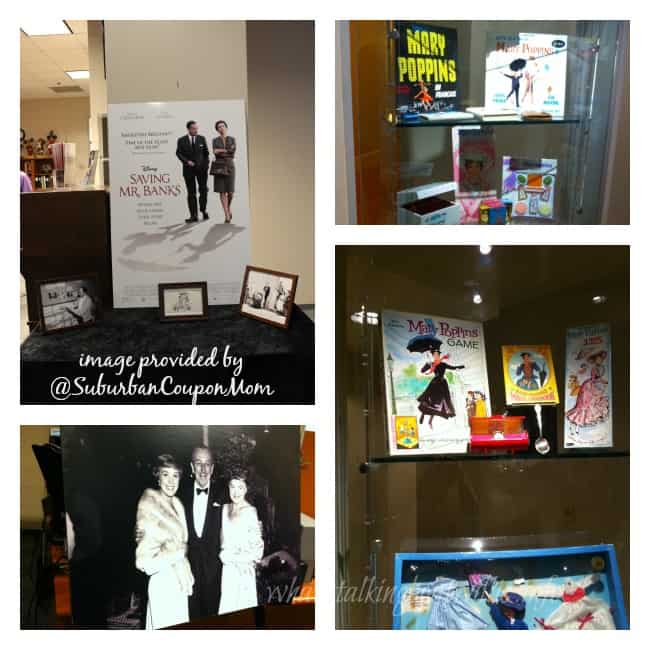 There were so many great parts of the exhibit for Saving Mr. Banks. We were able to view his office area and places that he frequented while he was there. I wish I had been able to meet him, as I think he was more than a businessman, but a man who wanted to bring joy and happiness to those around him. 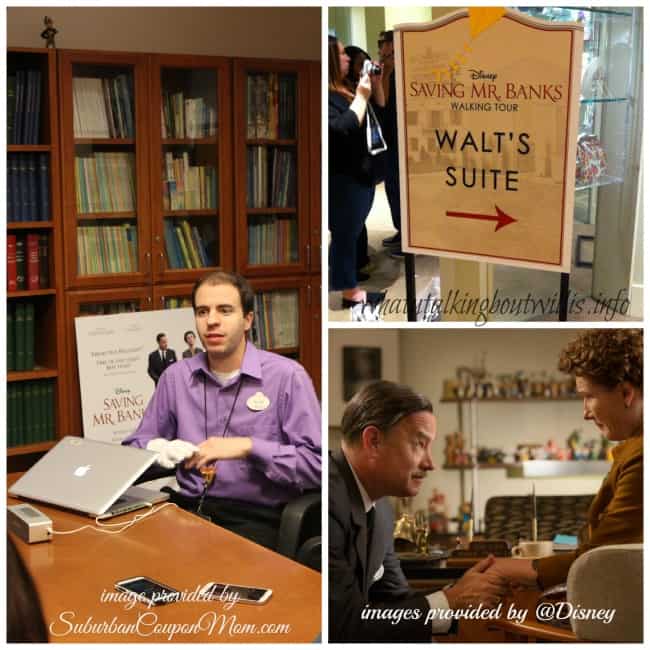 If you look at the picture to the left above. This is who spoke to us about the whole making of the movie Mary Poppins. This is what the movie is all about, Walt Disney wanting to get the story of Mary Poppins to film, a promise he made to his girls. Walt Disney just didn’t realize it would take 20 years to keep that promise.

P.L Travers was quite particular and a bit crochety; where as Walt Disney was more easy going, but wanted to win her over. The recording you could tell was old as it was crackly in parts, and it was mainly them talking about what she expected and what Walt wanted to do with the movie of the nanny, Mary Poppins.

This movie is not a documentary, but a movie so some of the ideas in the movie could be made more for humor. The core of the movie is infact the story of how Mary Poppins came into being.

Although this picture really has nothing to do with the archives or Saving Mr. Banks I wanted to include it. It is one of my favorite pictures of Walt Disney and Shirley Temple. Shirley Temple passed away right around the time we were in LA for this event. When I was little, Shirley Temple was by far my favorite actor. I watched and rewatched as many of her movies as I possibly could.

Another interesting part of  our tours while we were in LA was by Jeffrey at D23. You probably are wondering what D23 stands for; D stands for Disney and 23 stands for 1923 which was the year the company was founded. This is when Walt moved to Southern California to be with his brother Roy and set up shop in the Los Feliz neighborhood of Los Angeles. In 1940 Walt came to this lot after purchasing a parcel of land to set up Disney Studios.

Jeffrey said, “Tours like  like this are  a benefit for D23 Gold and Silver members.  We do three levels of membership.   But D23 members do get to do these kinds of tours.  We do two-and-a-half hour tours that are very historic about the lot and we take them into the archives, very cool stuff.  We’ are starting here because this happens to be one of the places that was shot for Saving Mr. Banks,  when Emma Thompson as PL Travers pulls up to the studio lot and she meets, Don DaGradi and the Sherman brothers for the first time.  It was right here in front of Stage A although, where Babes in Toyland in the film.”

At D23 they do not take themselves as seriously on the tour.  We like to have a little fun so it’s not a boring, solemn tour.   Stage A actually was original to the lot.  There are a bunch of buildings, which is very interesting, that were moved over from the Hyperion Studios.  They actually moved them over the hill, in the ‘30s and put them here rather than build a new building. You may wonder if new buildings wouldn’t have been cheaper to build. This was  actually during war time and the materials were at a premium so it was actually more economical for them to move an entire building over the hill than it was for them to build new structures.  We were able to see a  few buildings that were originals to the Hyperion lot.

Did you know that Stage A (although not one of the original buildings brought over) was: 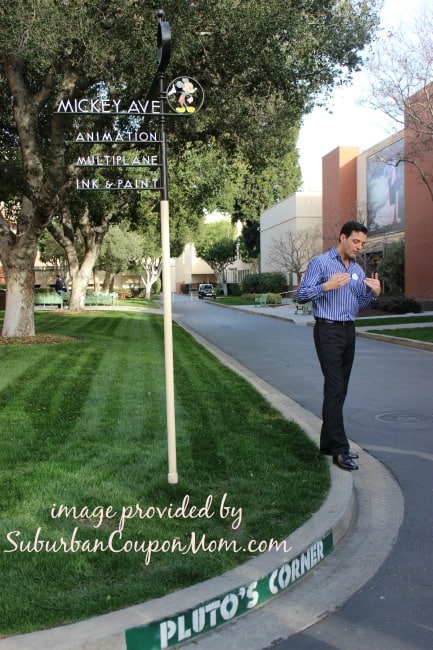 I know this is a huge amount of information.   I am hoping you will enjoy reading about the interesting facts and history of the different subjects I have covered. Stop by D23.com to at least sign up as a free member; and explore all they have to offer.

Thank you for sharing in yet another awesome part of this trip. If you would like to read any of my previous articles I have included the links below: